Learn about the icon of peace whose message has withstood the test of time.

"Gandhi is the most entertaining person I have met,” said the man who was himself one of the greatest entertainers of all time - Charlie Chaplin. That the legendary Chaplin should have found Gandhi ‘the most entertaining  person’ comes as a surprise to many, given that the latter is only thought of in the context of India’s independence struggle. After all, this was the same man of whom Albert Einstein remarked,  “Generations to come will scarcely believe that such a one as this ever in flesh and blood walked upon this earth”.

The uncanny sense of humour that Chaplin found so endearing was, however, just one of the many traits that made Gandhi a fascinating personality. In this exciting talk, international speaker Dr. Devika, who has spent her life dedicated to the study of the great leader, will take you on a journey to discover the man who rightfully came to be known as the Mahatma  (the Great One). The talk is as entertaining as it is educational, as Dr. Devika will teach you about Gandhi through an expanse of stories, images, videos and interactive discussion.

You will learn lesser known facts about Gandhi, and also realise why his teachings and practices withstand the test of time. 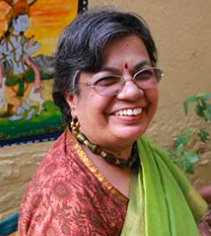 Dr.V. R. Devika is the founder and managing trustee of The Aseema Trust, a nonprofit organization for linking traditional performing arts and education and Mahatma Gandhi and education. Devika holds a PhD thesis on “Gandhian communication for transformation: Philosophical issues and dimensions” at the Department of Philosophy, University of Madras.

Amongst other recognitions, she has been awarded a certificate of honorary citizenship from the Governor of Maryland during her participation in the US state department’s International Visitor Leadership programme, British Council’s Charles Wallace Award for Arts in Education in UK, Goethe Institute’s cultural multiplicator fellowship to Germany, Kalasevabharathi award from Bharath Kalachar for contributions to arts and education, a lifetime achievement award from the Amir Khusro music academy, woman’s day honour from Jaycees, and various vocational excellence awards.

Dr. Devika has lectured extensively about Gandhi around the world and teaches the subject at various colleges.

She is trained in Bharathanatyam classical dance under The Dhananjayans and has researched folk forms. She gives lectures on the theory and practice of the dance and culture of India. She is a well-known storyteller, has authored the coffee table book “Ward 10 – Remembering Rangabashyam” and has contributed to several national and international journals on art and philosophy. She has been an art critic for Indian publications including The Hindu, The WEEK, The Indian Express, Financial Express and wrote a fortnightly column called “The View from the Wings” for Madras Musings. She is an author for “Weavers” an English language text book series published by Britannica India Ltd.