Students will meet a refugee who escaped the Darfur genocide and learn profound lessons about the crisis and the need for a unified world.

Darfur in Sudan has seen some of the worst atrocities in recent times resulting in more than 2 million deaths and 4 million people being displaced. It is known as the first genocide of the 21st century.

For more than a decade, there has been civil conflict between the north and south of Sudan. The northern region is largely populated by Muslims who are ethnically Arab, while Christians and animists dwell in the south. General Omar al-Bashir's Khartoum government sought to establish a more Islamic-based administration that was opposed by southern organisations, causing a two decade long civil war and unspeakable atrocities.

The war was brought to an official conclusion when the Comprehensive Peace Agreement, which included a significant multinational element, was signed in 2005. Despite this, UN estimates suggest that 2.7 million Darfuris remain in internally displaced persons camps and more than 4.7 million people live on humanitarian aid.

On this impactful, live, interactive Globe From Home session, students will meet with a refugee who grew up in the displacement camps of Darfur before seeking safety in another country. They will hear a first-hand account of life before the crisis, the journey of migration and the many challenges the refugee faced. They will hear about the undefeated human spirit that keeps the refugees going and how they are trying to create a new life for their families.

This is a one-on-one discussion where students will be able to ask questions and learn about International relations and the need for a seamless, united world with true empathy for others. 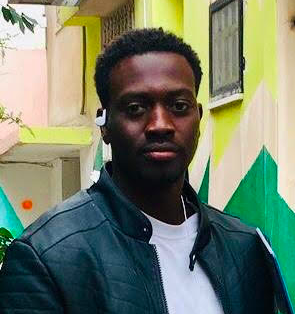 Faisal Babiker is a Sudanese national who witnessed the torture, killing, rapes and unspeakable atrocities against his family members in Darfur. Forced to grow up in a refugee camp for 9 years, Faisal finally fled the country to seek refuge in Jordan. Here, Faisal sought to rebuild his life and decided that a starting point would be to pursue education. His hard work culminated in a Diploma in Social Work from the Regis University.

Today, Faisal works for various NGOs and academic entities including the British Council and JRS . Faisal is an active social worker focussing on the refugee community and particularly children. A keen athlete, Faisal is also an avid sports enthusiast and enjoys football, basket ball, volleyball, swimming and kickboxing.